This Aircoupe spent it’s life in Western Canada. It was purchased it in 1997.

Originally arrived with trailing link landing gear but was converted to later model spring gear. It has flown as #3 aircraft in Flying Colors Precision Fight Demonstration Team, giving over 1000 Young Eagle flight experience rides. Currently flown as ones  personal transportation in BC. It has a Special Certificate of Airworthiness – Owner Maintenance. This allows the owner to do the maintenance and repairs on it. Annual inspections are signed off by the owner. It has continued to be maintained by mechanic to do inspections and work that is beyond the owners ability, but as an owner maintainer, the owner is the one who signs it off. This makes owning an airplane such as this much more affordable.

This a visual log of the redevelopment of this airplane to more current times. These airplanes are aged and need a good work over to improve the overall operation and airframe mechanical conditions. That being said, the degree of improvement is only as involved as ones own personal level of satisfaction. But in this case safety, utility and comfort is the order of the day.

This airplane has seen it’s share of owners, mostly in the prairies of Canada, and a bit in The north central US.  So, it has spent pretty much all of it’s life in Manitoba and Saskatchewan. A little time in Dryden, North Dakota and BC, But 90% of it’s 1680-ish hours on the prairies.11 owners in it’s lifetime, not sure if that is a lot but for sure it’s many. 1680 hours total time it is time for a make over.

Then it changed hands a few times but remained mostly in southern Manitoba.

Started it’s stint with Flying Colors Formation Team and Young Eagles on July 18, 1997.
Someone parachuted out of it on the same day (not the pilot).
Transitioned to owner maintenance in March 2001.
Flew to Clearwater Florida ( and back) April 2001.
Trailered to Oliver BC in 2018.

In the current state, the cockpit is quite traditional. I enjoyed the simple presentation of instruments enclosed by the white face panel. This cockpit looks in reasonable condition which has been shielded by the canopy cover. These covers are essential to the wellbeing of the Aircoupe canopy and cockpit, covered from prying eyes, and shielded from harmful effects of Sunlight UV damage. Simple coms and a simple tablet GPS device for basic VFR navigation. Lower central is that famous T handle pull start for the Continental C-90 with a generator. The little engine that sounds so big. Starts are always amusing, due to the big engine sound.

Aircoupe cockpit is being refurbished. Seats removed, battery box checked for connections and the years of dust and bits cleaned out. Seatbelt anchors are inspected and the integrity of the belts reviewed. Nothing glaring in the cockpit belly, just the normal years of operation, at the bottom.

Control sticks in these planes are often very worn, these are in very nice shape and will continue to serve well. Some avionics are updated. Transponder, Com, and GPS flat panel display look fresh, these will not be changed. This is a effective VFR machine and the Mode C transponder will serve for the near future.

Work began with some firewall forward inspection and the rebuilding of the brake system. This Landing gear system is an upgrade from the earlier Aircoupes, into the Leaf spring gear legs. Initial versions of the aricoupe gear were the Trailing Link Gear with an oleo shock absorber and alternation metal disc spring puck compression springs. These spring pucks would collapse, and become useless. Sometimes they are replaced by a layered Urethane Rubber compression puck that were stiffer for the taxi ride but lasted better and did not collapse. In this case we see that this gear is a leaf spring gear leg that is virtually maintenance free. It retains that great trailing link gear style that makes the Aircoupe landing qualities consistent with the original Aircoupe  design that is integral to the great crosswind handling qualities that makes Aircoupe’s famous.

Disk brake replacement continues and the brakes lines and calipers are cleaned and inspected, or replaced as necessary.

In the image here, the trailing link raked gear is evident. This gear design is significant in that it places the point of touchdown and wheel contact friction point far behind the centre of gravity. In a crosswind, this airplane is placed on the runway crabbed. Yes, the crosswind is not countered with cross control, the aircraft is landed crabbed and this trailing link gear, because of its aft contact point, actually straightens the aircraft out and the crab that was used to track centre line of the runway with the crosswind disappears. The airplane will go straight and track down the runway very well, and the last stages of deceleration and tracking are managed by the pilot in the traditional way. Differential breaking is also a benefit to aid in the most fun crosswind landings ever. The landings will leave you laughing in your seat, every time.

Large tires are superb in grass and even 8 inch Alfalfa crop, as experienced by this author many years ago. So as a grass field runway airplane, there are no worries for long grass performance. However, this long grass work is not on our list of operational choices.  The nose wheel is steerable and has a traditional shock absorber. The front wheel is also effective on grass and rough surfaces. Large torque links make for good control. The nose gear leg has a significant castor angle which also make for great runway centerline tracking at takeoff speeds.

In this picture, the Main Gear get new tires and the front nose gear gets a work over. It will also get a cleaned up front tire and bearings.  This front nose gear leg is very robust and will put up with the off pavement grass, gravel operations.

Also in this image we see the cowling off and an inspection of the accessories section of the engine is under way.  Oil change, exhaust system section inspection which we will review later.  The Aircoupe nose section is quite streamlined and efficient and fairs well into a fine example of a spinner. One day this spinner will get a healthy dose of aluminum polish to make it shine like your old pair of parade square drill boots, ready for any inspection.

These engines were less susceptible to carb icing as the carb is close to the oil pan and this keeps the carb warm. Still, good carb heat management is always prudent so a review of carb heat and mixture cables is always good to adjust.

In 1985, my experience with this Aircoupe began, C-FDBF. It entered our lives while we were junior pilots learning our Private Pilots License’s. This writer was owner in this Aircoupe and it became a part of our lives through it being flown by me and my father. It just so happened that the owner of the airplane in this rebuild log, Martin, discoverd the Aircoupe A2 because we as school mates flew it to Red Deer from Edmonton one day. Over 30 years later Martin decides he wants one of his own and the career cycle for both of us comes full cycle in the rebuild of C-FVCH.

C-DBF was upgraded with some current radios and the Tube style radios were removed. The interior was upgraded, as was the prop and landing gear and tires. Trim was frozen up so this was fixed. The main gear strut olieo springs were flat so these were traded for the urethane pucks that Univair offered as a mod. This firmed up the taxi ride and improved on the touchdown and landing characteristics. In some models like VCH, the Aircoupe main gear were replaced again by the spring steel gear lakes observed in the images above. C-FDBF is shown below, with new clothes on. A whole new paint scheme but being true to it’s past retained the trim colors of orange and yellow.  This surprised me at first, as I liked the original paint scheme but since I was not part of the ownership of the airplane anymore I had no say. Now, looking back I can say that I have grown to like the new colors of C-FDBF.

Resuming review of C-FVCH, we look at the Fuel pump system. These were a wobble pump driven by an articulating arm that rode a lobe on the camshaft that moved the pumping diaphragm in the fuel pump. I had one wear out in C-FDBF and this situation stopped the flow of fuel from the main tanks up to the header tank that was a gravity feed to the engine. With this case, one had only 30 minutes of useable fuel even if the mains were full.  Thus a pilot would, if not being observant, run out of gas in short order. So investigation revealed that the cam follower that operated the fuel pump had run flat, wore up, so that the pumping action of this said fuel pump was not moving any fuel. This problem was rectified by changing the fuel pump.

Tail cone removed for inspection of the elevator and associated trim systems. What I found interesting about the tail section was that the Aircoupe has Differential Rudders, in that upon full deflection, one rudder moves more that the other in appropriate amounts. Some of this was to provide the appropriate yaw control with out excess movement to allow excess yaw to occur in order to protect pilots from entering inadvertent  spin conditions.

There has been further work done on the plane to get it ready for the Spring 2022 flying season so I will check back in and make some updates on it’s progress for the new year.

It’s now the end of January 2022, and we finally had an opportunity to work on VCH today. First time since about October that we had any real time to put into it. in this case, Here we have ourselves stuck under the panel so we could finish cleaning under the rudder pedals. One needs to be a contortionist to get this job done right. In this case, an inspection and lubrication of the control column and rudder pedal assemblies is next. Then the interior can go back in. Finally!!!

It’s now June 2022, and since January 2022, a lot of progress has been made almost to the point of regaining flight status. I will continue on from the last point during a cockpit tear-down. 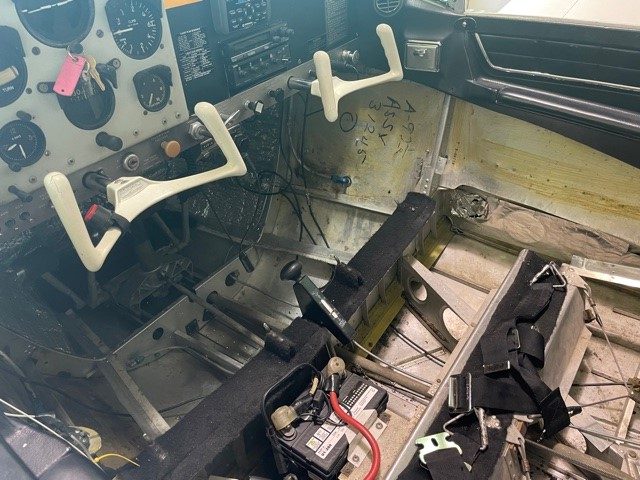 In these recent images, we see the interior side panels and floor boards removed to get behind and below. A good inspection of the rudder pedals installation and control rods and push-rods. Many of the later model Aircoupes from former manufactures had rudder pedals installed. Fourney and Erco made the early Ercoups without pedals. That was by design. Alon in the 1966 versions, rudder pedals were factory installed and in some cases an option. Much dirt resided in the lower levels under the pedals and this was all cleaned out. Cockpit side panels were removed, including seats and floorboards. These pieces needed recovering and in some cases rebuilding. 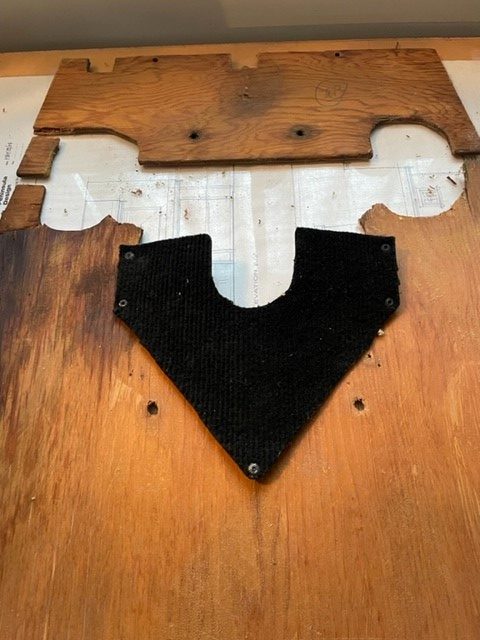 This section of floorboard was pretty old and worn out so all of these items are getting either rebuild or recovered. 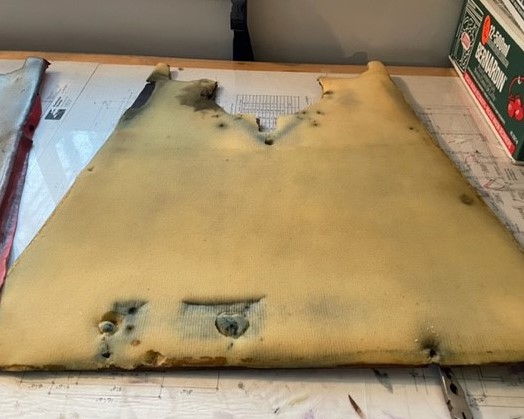 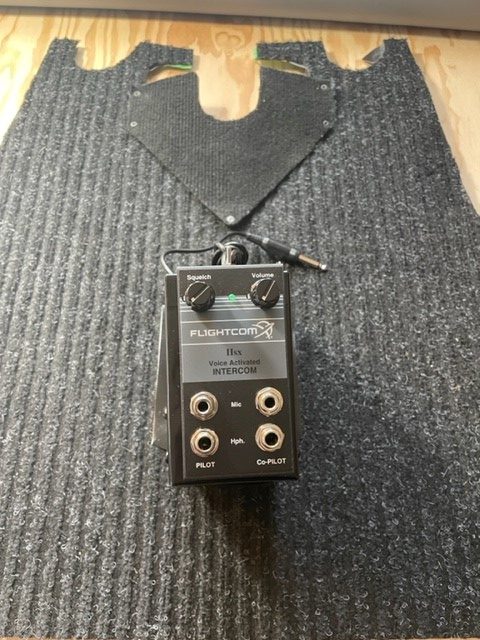 Later picture one of the floor boards recovered and demonstrating the intercom box and it’s mounting which will be detailed later.

Further tear down of the panels and floor boards, exposing seat mountings, battery box, main spar box running side to side underneath the trim wheel. Left side is a fuel on off lever. Battery and it’s associated tray will be removed and rebuilt. 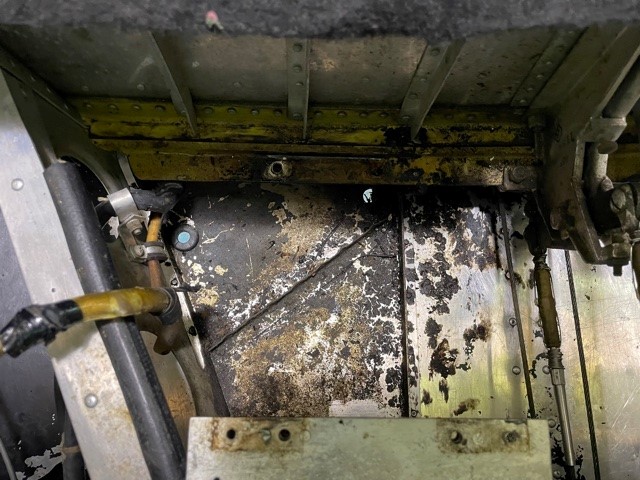 This battery tray floor residing under the battery tray was full of gunk, cleaned and inspected for battery crap. 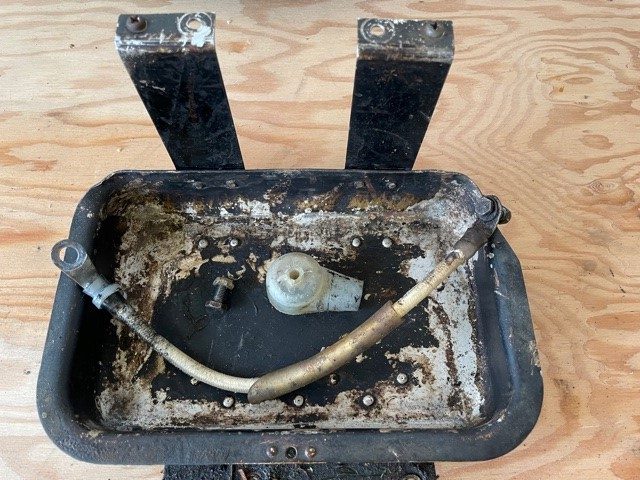 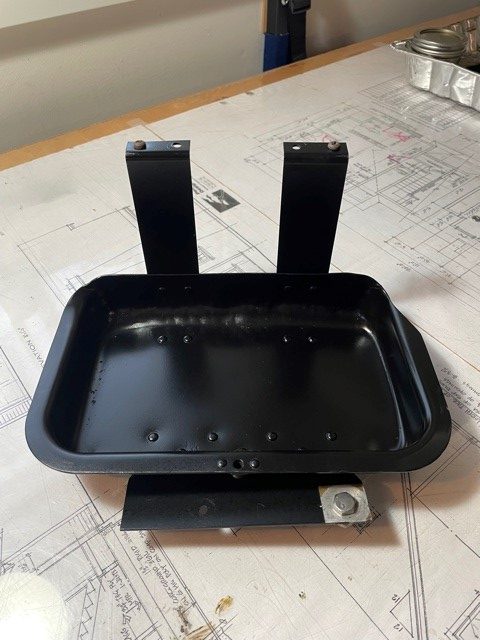